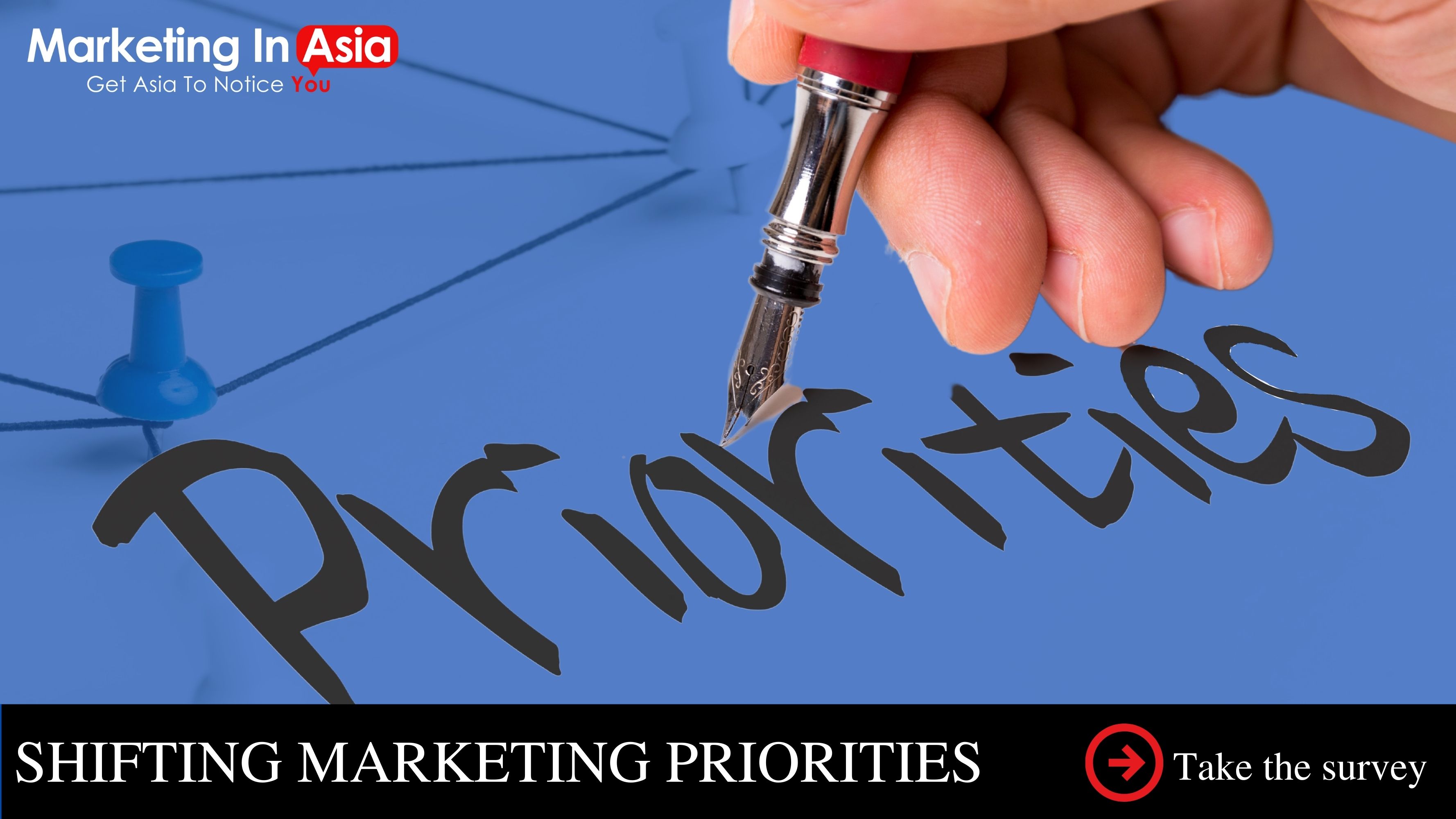 Which Asian Countries Are At The Forefront Of The 5G Race?

5G technology has the potential to create 22.3 million jobs and $13.2 trillion in global economic output by 2035.

Countries that wish to stay competitive in the global market are accelerating their adoption of 5G technology. The race to find who will have the best 5G network has officially begun. Around the world, communication service companies are competing to design, verify, and implement commercial 5G networks. By 2035, 5G technology could be responsible for 22.3 million employment and $13.2 trillion in worldwide economic output, according to estimations released in an Informa Tech research study. According to research conducted by the Economist Intelligence Unit (EIU) in 16 APAC nations, nine markets have completed 5G spectrum auctions or launched commercial 5G services, with some even surpassing 50% coverage as of March 2021.

"Having a detailed nationwide 5G plan prior to a launch is really advantageous for operators," said Laveena Iyer, a Research Analyst at EIU, in an interview with iTNews Asia. "Following a commercial launch, government assistance in the form of tax incentives, low-cost loans, and direct investment assists operators in expanding their networks." Financial assistance from the government was critical in supporting 5G networks and facilitating testing for industrial applications. She added that the support has prompted businesses to improve network speeds, coverage, and the number of use cases for the commercial sector.

So, who is in the lead and who is trailing in this race? 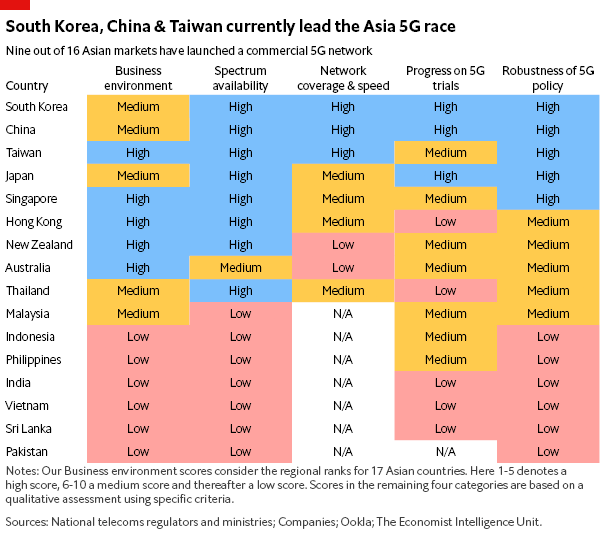 Photo by The Economist Intelligence Unit on Channel Asia Singapore

South Korea, Taiwan, Japan, and China are the most advanced in 5G, according to the experts; Thailand is making good progress; and India, Indonesia, Vietnam, the Philippines, Malaysia, Sri Lanka, and Pakistan trail behind their regional rivals, having yet to enact a 5G policy. The rankings took into account a number of variables, including the business environment, spectrum availability, network coverage and speed, progress on 5G trials, and the robustness of 5G policy, as shown in the chart. According to experts, operators in several of these countries are still focused on enhancing 4G connection, so any progress on 5G is unlikely until beyond 2022.

"The ability of a country to proceed to 5G will be mainly determined by existing network infrastructure. South Korea and Australia, both mature markets, already had over 90% 4G penetration. However, because Malaysia and the Philippines have less than 80% 4G network coverage, operators in these countries would not be able to establish a 5G network until early 2022," Iyer explained.

The distinguishing elements between leaders and laggards appear to be a combination of spectrum availability and government policy, with the former playing a significant effect in the shape of a country's 5G environment. Let’s take the Australian and Hong Kong regulators as an example. They have been particularly helpful in establishing low base prices. In India, where regulators and operators continue to argue over the base price, high spectrum costs have been a source of anxiety for businesses. Operators in the country are expected to look into fund-raising strategies to assist fund future spectrum auctions, according to researchers. 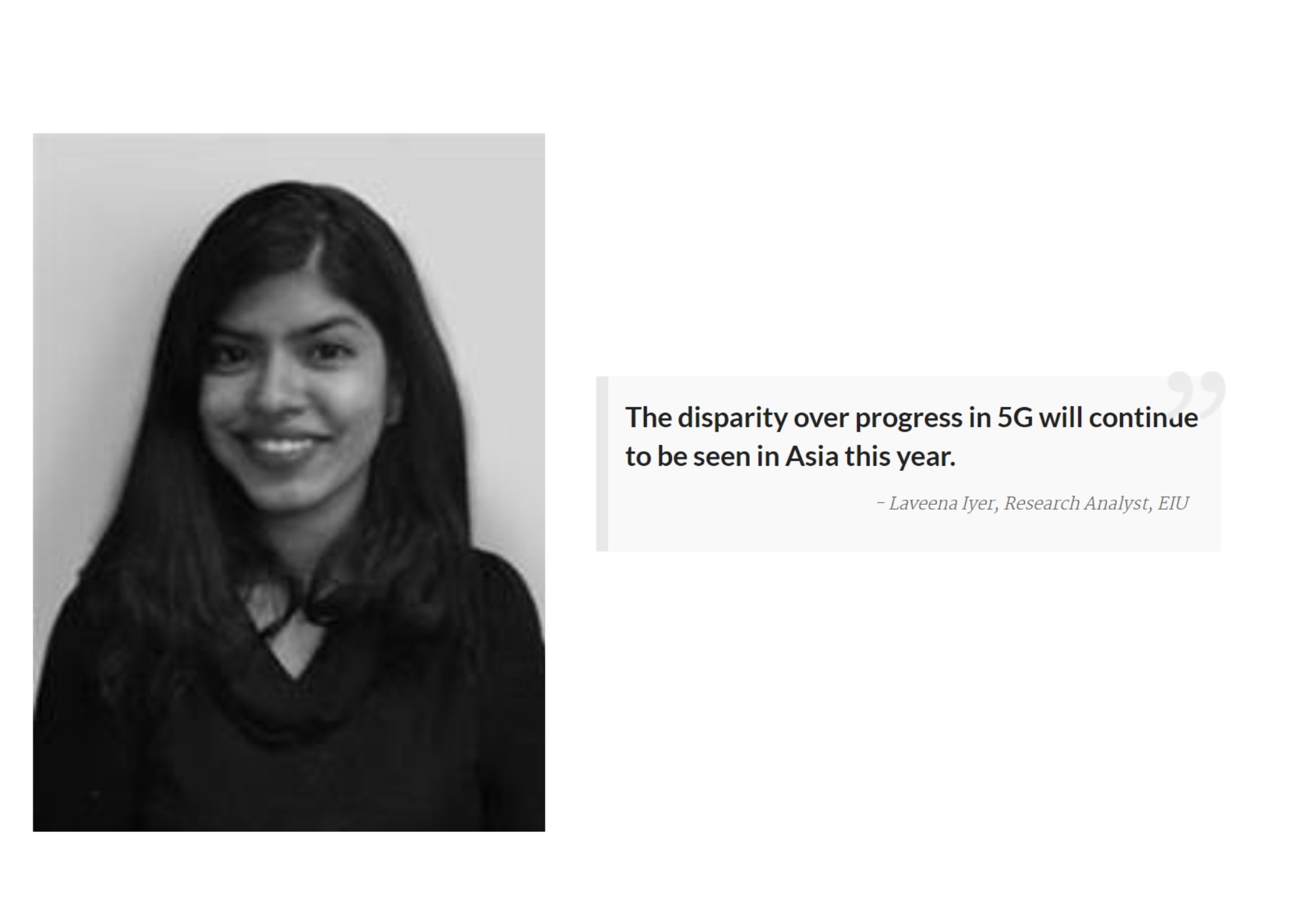 In terms of government policy, The Economist Intelligence Unit identified three significant policies that have helped Asian countries advance 5G infrastructure, including coverage targets, tariff restrictions, and the implementation of a precise industrial 5G policy, such as the one in place in Singapore. For example, Maritime operations, smart estates, Industry 4.0, government applications, consumer apps, and urban mobility are among the six industrial clusters identified by Singapore's regulator as the most likely to gain from the deployment of 5G. This technique is especially valuable because the enterprise sector, specifically smart manufacturing, smart cities, and edge computing, tends to offer the largest 5G development potential.

The enterprise sector, specifically smart manufacturing, smart cities, and edge computing, will offer the highest growth potential for 5G, according to the EIU. On the residential broadband front, operators have been permitted to charge retail users a price similar to that of fibre networks, which is a new and previously unforeseen source of revenue.

"For businesses, establishing a 5G network is a capital-intensive activity. In the immediate term, retail adoption is projected to be slow, but EIU research shows that 5G-based residential internet is gaining traction in areas like Australia and Hong Kong," said Iyer.

Consumer uptake of 5G mobile services is questionable in terms of risks. Companies that have introduced 5G have had to give high discounts or provide 5G packages as a free service for a limited time. As these promotional deals expire in 2021, EIU predicts that determining a reasonable price point for 5G would become more difficult.

According to the Economist Intelligence Unit, national governments in the remaining seven Asian countries that have not yet released 5G spectrum, should focus on vacating radio frequency bands that are now claimed by other media or defence services.

The research group stated that, "Making continuous blocks of spectrum available is crucial to network performance and speed."

VIS Global And Uniphore Partner To Augment AI For ...