Working with the National Digital Literacy Movement (GNLD) Siberkreasi, the event has brought over 2,500 participants. 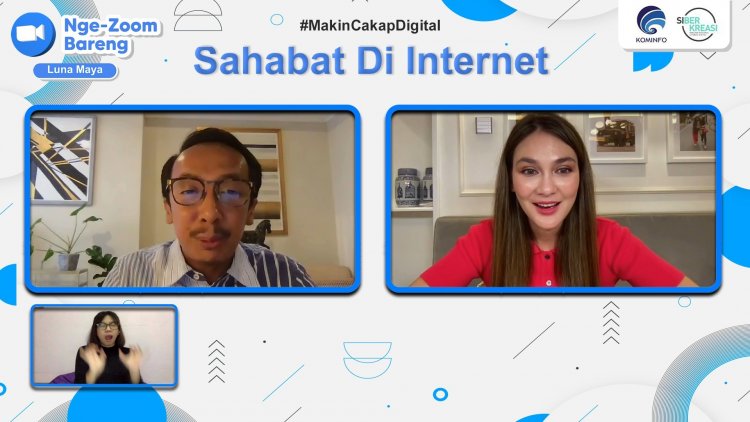 Hosted in collaboration with Indonesia's Ministry of Communications and Informatics, the online event has brought over 2,500 participants. It was a part of the country's digital literacy campaign #MakinCakapDigital, or a series of digital events, webinars, and education programs focusing on digital literacy skills and social media advocacy.

Harnessing the power of positivity

About 170 million Indonesians, or roughly 84% of the country's internet population, are on social media, ranking Indonesia's social media users the third-highest worldwide. Indonesian people spend 3 hours and 14 minutes on average logging on to social media every day. For comparison, the global average time is 2 hours and 25 minutes.

"Indonesian social media audience isn't just large, we are also one of the most active users in the world," said Luna during the live Zoom session. "Because social media is so prevalent in our lives today, we need to know how to use the platform responsibly and appropriately."

As discussed during the program, social media addiction continues to rise, on par with the increased time spent on the platform. Research shows that as many as 210 million people worldwide might suffer from social media addiction, which has been linked to a range of adverse outcomes such as depression, low self-esteem and the feeling of isolation.

"Having the skills to produce creative, inspiring, and meaningful content online is one of the key components in harnessing the power of positivity in social media," said Luna. "From online communication skills to critical thinking skills, the education allows us to filter out hoaxes and fake news while combating the negative effects of social media."

The program also discussed topics around growing social media audience responsibly by creating quality content in a consistent and effective manner. Speaking as a founder and owner of several fashion, beauty, travel, and food businesses with strong followers, Luna shared her insights with audiences on how to establish their businesses online.

"The success of using social media is influenced by two aspects: quality and quantity. Being consistent in uploading quality content will help the account owner be more prominent, so try to post content regularly," said Luna.

Digital literacy is high on the Indonesian government's agenda, which sees several initiatives being launched this year, including Siberkreasi. The program is built on four pillars: digital media culture, safety, ethics, and competence, and calls to improve the public's digital literacy skills that revolve around the ability to create, evaluate, and responsibly use the content in digital space.

1.26 Billion People At Highest Risk Of Conflict And Displacement Caused By Environmental...

Malaysian YouTuber, The Segment Is Set to Launch His NF...

Divo Join Hands With Media Masons To Offer Publishing A...

The Asian Century Is Here: Edipresse Media Rebrands As...

Debuts New Logo, Print Redesign and an Exclusive Portfolio of Asia’s Next Generation...

Embracing a new brand identity underpins that evolution and our vision to become...

Chimp&z Inc Releases A Short Film To Raise Awareness On...

#IAmHere and #IAmHearing’ is a thought-provoking short film that reiterates self-help...

Never A Better Time To Get Groceries From Home With New...

Use this voucher code

Can you believe that it has been 20 years since super-cute/super-fierce trio first...

HBO GO Launches In The Philippines As A Standalone Service...

Subscribers have unlimited access to stream thousands of hours of non-stop and uncut...